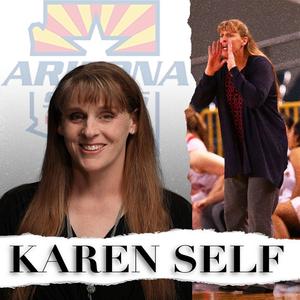 Seton Catholic Preparatory head girls’ basketball coach Karen Self continues to be honored for her 30+ years of excellence and success as the Sentinels coach. For her dedication to the Arizona sports scene, she will now enter the Arizona Sports Hall of Fame as a member of the 2022 class, as announced by the Arizona Sports and Entertainment Commission on Wednesday.

Self arrived at Seton Catholic in 1993 after a decorated career at Arizona State and started building, working up to her first state title in 1997. From that point on, her teams have regularly reached the championship game, winning 11 more state titles and finishing as runners up in five more, all while notching 26 straight region titles along the way.

Not only have her programs had success on the court, through her positive guidance and character building, her teams have garnered respect and praise in the community for their sportsmanship and how they handle themselves as representatives of Seton Catholic, as evidence by earning the AIA Sportsmanship award multiple times.

Through it all, Self has been named Coach of the Year at the state level multiple times, was named NFHS Coach of the Year during the 2016-17 season and was a 2017 inductee into the Arizona High School Coaches Hall of Fame.

Despite all of the awards, what means the most to her is the impact that she has had in her athlete’s lives and the community.

“Working daily to help develop our current players, it's hard to put into context the impact of a career,” Self said. “But, ultimately, that is the goal of every coach, to make an impact. When I look down our bench and see 3 alums coaching with me, attending graduations, weddings, and baby showers, is really when I get a sense of the impact of being a part of this amazing community. Anyone who truly knows me understands that my players are my why. Without them, none of this is possible.”

The ceremony for the Arizona Sports Hall of Fame will be on November 1. Tickets for the event will go on sale on Sept. 1 and can be purchased at AZSportsHOF.com

More information can be found at: https://arizonasports.com/story/3249214/larry-fitzgerald-pedro-gomez-in-2022-arizona-sports-hall-of-fame-class/